The Russian Death project is a study of the meaning of death in Russian culture. Globalization erases differences between peoples, traditions passed down from generation to generation are forgotten. But the attitude towards death, rituals and ceremonies, are preserved as sacred: from the first discovered grave of a Neanderthal, strewn with flowers, to modern crematoria. Every nation has a different attitude to death, and in this respect its identity is revealed.
The use of the phrase “Russian death” in the project denotes a broad phenomenon. Studying the attitude towards death, we come closer to understanding the spirit of the culture.

The first installation. “Death of the body”.

The installation consisted of six large canvases (300/200 cm) painted in oils from photographs I found during expeditions to abandoned villages and from family archives. In the center of the hall stood – an artificial spruce made from discarded funeral wreaths presented to me by the cemetery keepers. Inside the tree, speakers were installed through which the recorded sound of sleeping breathing and an accordion passed. The melody of the children’s accordion was recorded during an expedition to an abandoned village, where the accordion was found. 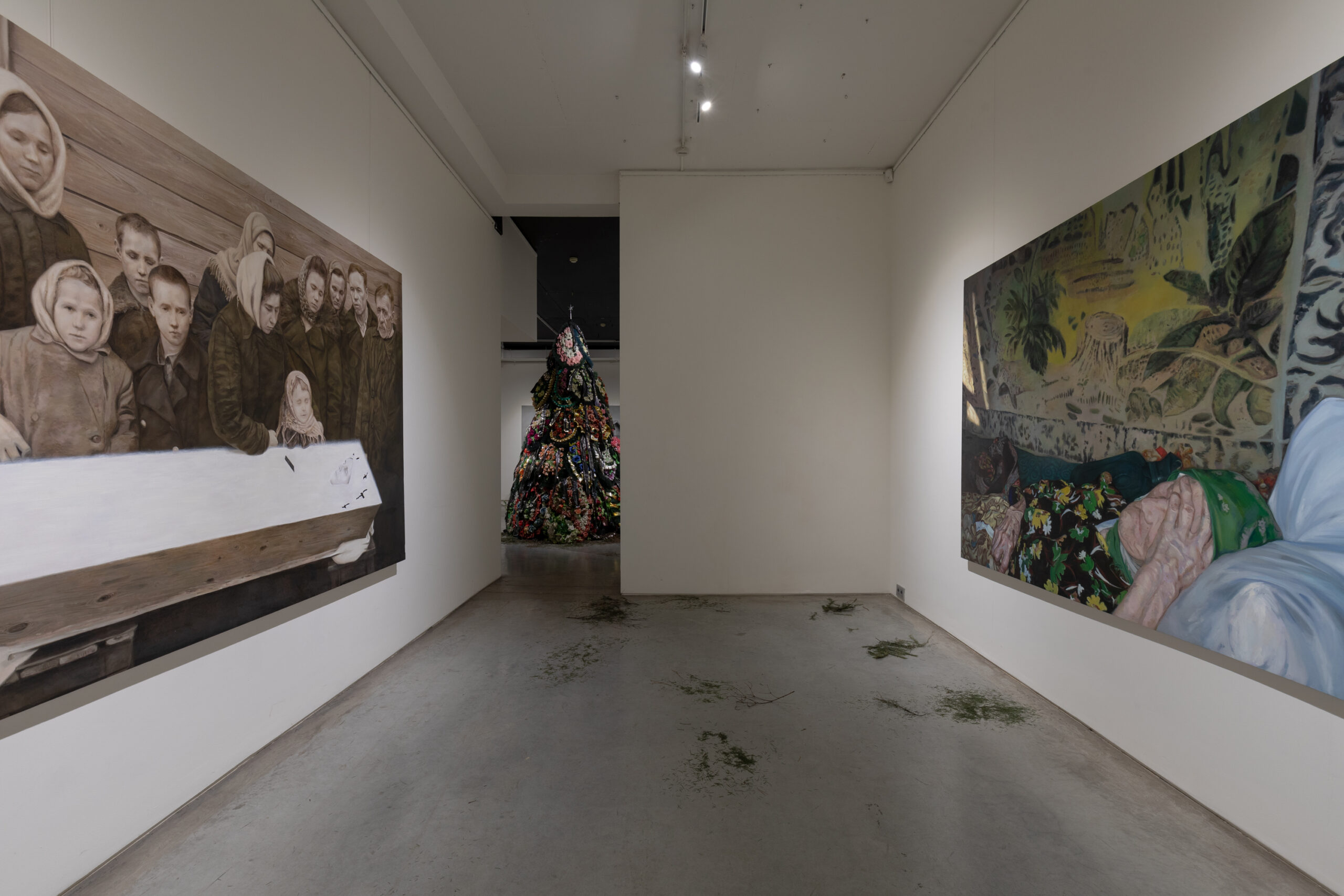 In the center of the hall is an object with a cat mummy found in one of the village houses. The object is made in such a way that, when you approach the cat, you can hear a purr. The cat is softly lit with twelve screens around it in the dark.

Each screen plays a 24-hour video of a house from an abandoned village, recorded by me on expeditions that I made during the year. In total, 12 houses were rented by the number of months a year.
This installation uses sounds that I recorded in abandoned villages.

In the installation, the phenomenon of death is comprehended through a change in attitude to faith. In the center of the hall there is a burnt-out part of the iconostasis, and icons hang in front of it, through this space the viewer enters the next hall. Of particular importance to me is the fact that these icons are genuine, silent participants in the process that interests me.
During the exhibition, the Arabic Nasheed was played in this hall, in which it was sung about how passions destroy a person’s soul.

During the expedition to the abandoned villages we found a one and a half meter icon of the Virgin Mary, which served as a table top. It has traces of cutting bread and hot cast-iron pots of porridge. Also, in a half-burnt house, a burnt iconostasis was found, preserved by a local resident from a destroyed church in one of the villages. The installation uses icons as an image of things that have lost their sacred meaning and value for a person, and have become objects.